Using false personas, the trolls pushed narratives about voter fraud during the 2022 midterm elections on Gab, Gettr, Parler, and Truth Social, according to Tuesday’s report by the Stanford Internet Observatory and Graphika.

Campaigns have previously been identified on Gab, Gettr, and Parler, however the report is the first time that Russian interference has been linked to Truth Social.

Graphika assessed with “high confidence” that the activity is “linked to the actors behind the Newsroom for American and European Based Citizens (NAEBC), a fake right-wing news outlet” which Meta, and reportedly U.S. law enforcement, believes is linked to Russia’s Internet Research Agency (IRA), an organization sanctioned for its interference in the 2016 election.

The trolls’ posts also linked to the “Foundation to Battle Injustice” (Фонда Борьбы с Репрессиями) which describes itself as a human rights organization “founded with the assistance of Russian entrepreneur Yevgeny Prigozhin” who, alongside his involvement with the Wagner mercenary group, was sanctioned alongside the IRA.

They attempted to “undermine public support for Ukraine in the context of the Russia-Ukraine war,” according to Graphika, and “due to an apparent lack of enforcement, the actors have established a degree of persistence unavailable on most mainstream platforms and are able to conduct their operations with relative ease.” 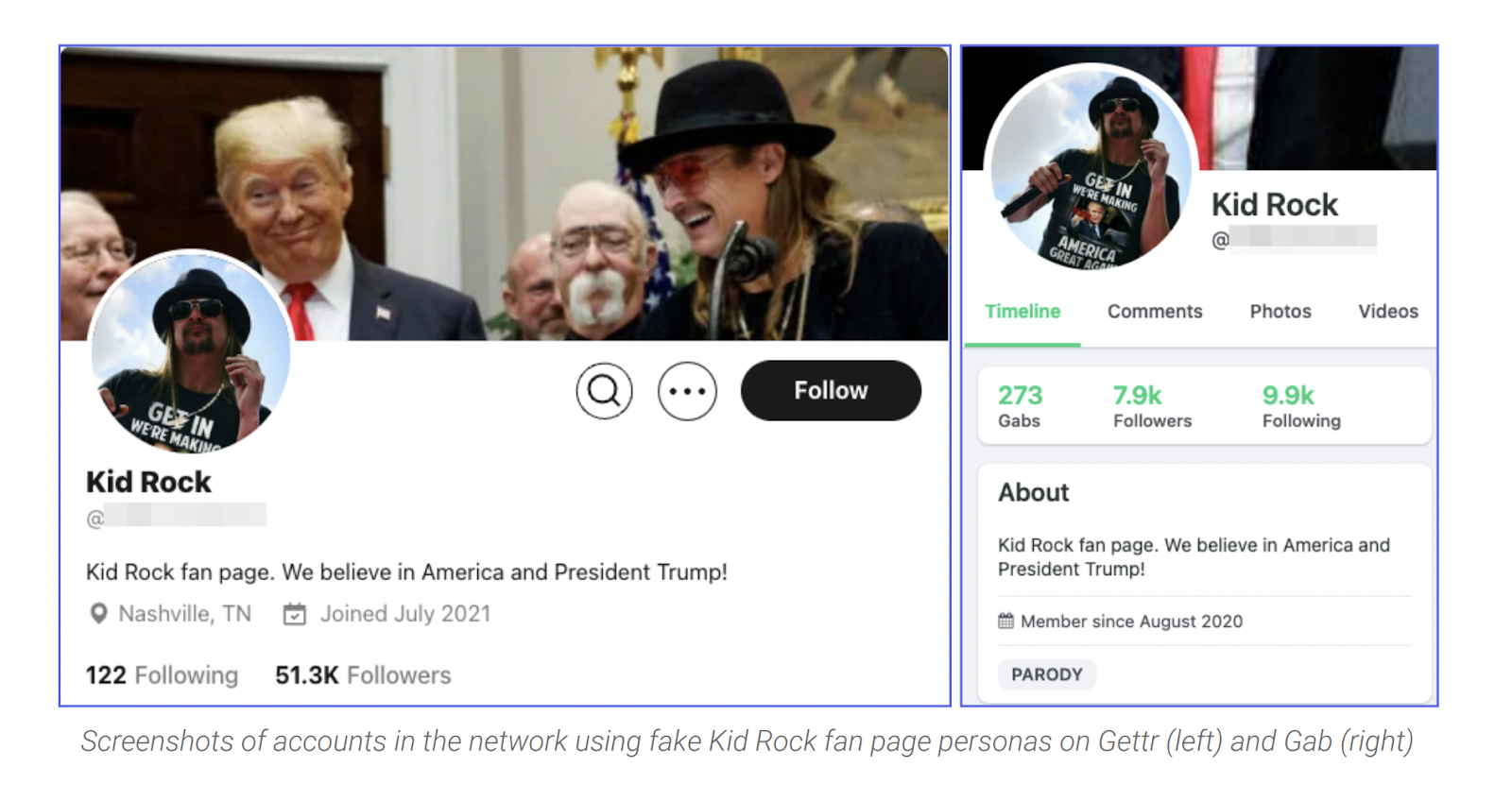 Although it “largely operated in an echo chamber of highly-dense overlapping follower relationships on fringe platforms” there were “moments of significant ‘break out’ when content created by the actors was amplified organically to large audiences on mainstream social media platforms.”

Among these incidents was a fake Kid Rock post from Gettr (later redesigned as a “fan page” that was shared on Instagram by Donald Trump Jr). The post played off concerns and conspiracy theories around climate change and the COVID-19 pandemic by stating: “Domestic oil is the new ivermectin. You can’t have it because it would resolve the crisis they need you to go through.”

The Record has contacted Kid Rock’s publicist for a statement.

Alongside a range of behavior and technical indicators linking the group to Russia, which are detailed in the full report, the posters made grammatical errors that are common among Russian speakers – particularly around the use of the definite and indefinite article. One cartoon criticizing European Union limits on Russian oil imports was posted with the comment: “This is how partial embargo looks like [sic].”

In another instance, Graphika saw “a network asset post a Twitter screenshot to Gettr in which Twitter’s automatic translation prompt is visible in Russian under the English text,” revealing that the user is either browsing Twitter in Russian or has Russian set as the language of their operating system.

Graphika’s analysis identified a core group of 19 accounts on Gab and 10 on Gettr involved in the information campaign. Five of the accounts on Gab had previously been attributed to the NAEBC while 14 additional accounts showed “near-identical posting patterns, content promotion, and highly correlated network behavior.”

The study found a core group of thousands of interlocking follower relationships on Gab, indicating that the network had built an audience of thousands of authentic users.

Tyler Williams, the director of investigations at Graphika, said the group’s tactics are “exactly what we’ve come to expect from these actors since 2016,” but had found a more receptive audience among the fringe social media platforms.

The tactics, using “fake personas to imitate, infiltrate, and attempt to influence a specific online community” who then “coordinate across multiple platforms to amplify division and exacerbate existing tensions” are the exact behaviors that allow social media companies such as Facebook and YouTube to catch them. However, “on alt-tech platforms they appear to enjoy relatively free rein,” added Williams.

“This operation doesn’t appear to have evolved much beyond efforts we exposed by the same actors in 2020 and 2021. In terms of influence or impact, they mostly scream into an echo chamber on the fringes of the online conversation, with sporadic moments of ‘breakout.’ Despite public claims to the contrary by the actors themselves, we consistently see them struggle to achieve sustainable reach.”

Alexander Martin is the UK Editor for Recorded Future News. He was previously a technology reporter for Sky News and is also a fellow at the European Cyber Conflict Research Initiative.